Well, if you are a K-pop fan, BTS does. And, seeing as I am in fact, a fan of K-pop, I dragged my husband up to Hamilton, Ontario for their concert. There are a lot of reasons I love BTS. But lets go back to the beginning. I’ve never been into boy bands (though I would argue they are more than just that). My first concert was Matchbox 20. Actually, they make up more than 50% of my concert attendances, and that is not including Rob Thomas’s solo tours, that yes, I have gone to many of. And if I don’t stop now they are going to derail this blog post with how much I love their music, and how you don’t know emo until you’ve listened to Rest Stop off of their album Mad Season (seriously, if you are having relationship issues, do not listen to that song).

Maybe this was me trying to relive my youth, or maybe I am 13 going on 30. I just really felt I needed to see these young men live, and boy was it worth it. Their music is as good as it is meaningful, and if you follow anything about them, they are just downright decent humans. But what I love most about them is their drive. These young men are so inspirational. When I get home from a horrid day at work, and I am not in the mood to write, I think about them. I think about how they are everywhere. Always practicing, always bettering themselves. Working on new things while on tour. Writing lyrics while on a plane. We all find motivation in different forms in this world, and they apparently have become mine.

The concert was awesome. They put on an amazing performance. I took a few pictures, but this is one of my favorites. 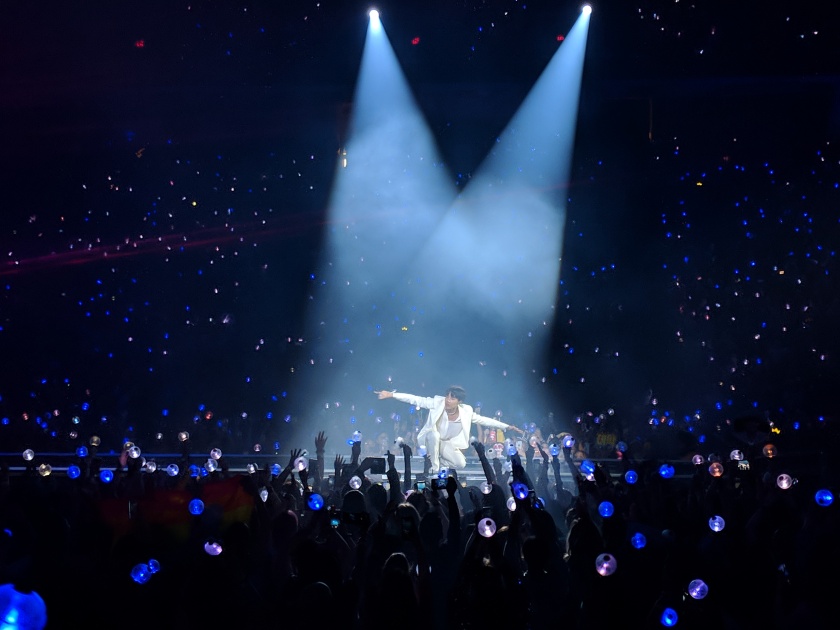 It is of J-Hope. I love the contrast of the blue army bombs (light sticks) and the stage lighting. Out of all the members, I got the best pictures of him. He was so animated. Coincidentally, his solo on their most recent album, Trivia 起: Just Dance, is my favorite. The runner up to that is Trivia 轉: Seesaw (a lot of peoples favorite), but that is a very emotional song.

So I guess it is time to use this motivation, and this day off, to do some writing. Or you know, power-read through Vengeful, which came out today, and yeah okay, maybe I am already 1/3 of the way through. One or the other. But first, coffee.

I wrote something, yay! I has the words. Not too much, but a whole scene. It could be the fact that I fell asleep at nine last night after an evening race. I didn’t make my goal time, but I opted to start farther back to socialize. Oh well. It was hot, and with 10k+ people, there is no room to move. It was the kick in he but I needed, because I fell asleep halfway through my beer, and slept all the way till the morning (Friday is my off day). I feel re-motivated now. I have been writing some backstory too. Nothing that will be put in the novel, but I figured if this becomes a real thing then why not post it here? I guess only time, and hard work will tell.

In the fangirl world, BTS released their new album today. I think my favorite song  so far is Outro: Tear. Maybe that helped to motive me as well. New music is always great. Speaking of, their interview with Buzzfeed was awesome. That is the right way to do an interview with non-English speaking peoples. I mean, the puppies helped too.

I also found a perfume I really like, Tori Burch Just Like Heaven. It smells like lilacs. I never wear perfume, it is hard to find ones I like because a lot of scents really bug me. So what a success all thanks to my co-worker’s recommendation. AND, I know, no one cares about this, but I found a great pair of, joggers? I think that is what they are called. On sale in the men’s section at my local sporting goods store. They are Nike brand and way better build than anything in the women’s section. I like to have leisure clothes for when I am on the plane or just want to chill at home not in pj’s. Oh, and, last one I swear, I found a new book to read, even though I am on a reading pause at the moment (the lies we tell ourselves), called A Thousand Pieces of You by Claudia Gray. It is a YA book that one of the YouTuber’s I follow recommended. Her name is Chelseadolling reads. She is super cute and has totally different taste in books than me, but I still love watching her.

It has just been a great week. Which is nice, since I felt like the last three left much to be desired. I should have titled this: Things I like. But then again, I like a lot of things. So the list would go on and on.